the Poet of Meira 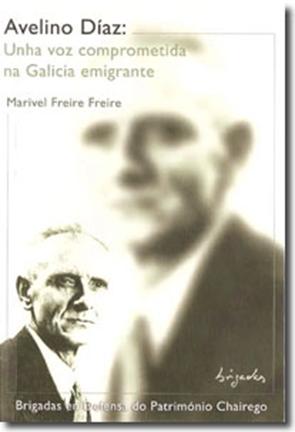 Avelino Díaz y Díaz was born into a humble peasant family, in the place of A Travesa (Santa Comba de Órrea parish), in the Lugo town hall of Riotorto, on November 14, 1897.

Until he was 10 years old, Avelino lived with his maternal family in La Travesa, moving to Meira in 1907. Three years later, in 1910, when he was only 12 years old, Avelino took the path of emigration to Buenos Aires in the company of a relative.

The training of the “poet of Meira” before emigrating was minimal, like other children he could only attend school when it rained.

In his poems already written in Argentina, he reflects that in addition to working, he dedicated some time to training or in any case to reading everything that came to his hands.

After a 6-year stay in the Buenos Aires capital, driven by health or because things were not going well for him, although he had already earned some money, he returned to Meira in 1916. In this town he will stay four years dedicating himself to practice, without official title, as a teacher in three surrounding villages and, according to him, he has confessed, going to the harvest in Castile.

In 1921 he settled permanently in Buenos Aires, where he soon married a young woman from Navarra, Felisa Iduriaga, eventually having four children and forming a home of which he would always feel very proud.

Despite the immense affection he felt for the Earth and for his mother, he never returned.

In the capital of Buenos Aires, where currently a street bears a homonymous name, he would die on March 29, 1971, in the Sanatorium of the Galician Center, at the age of 73, almost blind and suffering from Alzheimer’s.

He was buried in the Pantheon of the Galician Center near Castelao and Ramón Suárez Picallo, two great personalities whom Avelino deeply admired.

Avelino published three poetic volumes while still alive, the first two (“Flor de retama” and “Debezos”) in 1947, about to turn 50, and the third (“Pallaregas”) in 1963, at 65. All three are the author’s edition, which must have meant a great financial effort for a man who lived and supported a family with a not very high salary as a salaried worker. Both “Flor de retama” and “Debezos” were very well received by critics, being the subject of numerous recessions that respond, to a large extent, to the appreciation and popularity it enjoyed in the community; “Pallaregas” went more unnoticed, at that time our author was already somewhat removed from public events due to the ailments of his precarious health.

Edited by: Brigades in defense of the Chairego Heritage

The Cultural Association “Avelino Díaz” aims to value the life and work of the poet born in Santa Comba da Órrea, but who spent part of his childhood in Meira. As a teenager he emigrated to Buenos Aires, where he developed an intense journalistic and literary activity.

The purpose of this association is to get a Galician Literature Day dedicated to this author, in order to give recognition and dissemination to his work.
To do this, they promote endless initiatives that give visibility to the life and work of this distinguished character.

Both the CEIP de Meira and the Sociocultural Center of Riotorto bear the name of “Poeta Avelino Díaz”. Reference is also made to his work in the street of Meira, giving names to two streets near the Professor Río Barja park, and they are: Rúa Avelino Díaz and Rúa Debezos.